Hello all,
I have been trying to run a FOOOF based resting state analysis with my MEG data (recorded on 306 channel Elekta Neuromag Triux) and while computing scouts time series we can prominently see this peak at 7hz with harmonics at multiples of this frequency. The same isn't too prominent on the scalp MEG power spectrum, but is very prominent on the power spectrum of the scouts (screenshots of both attached, the one labelled MEG/PSD/A1 (top image) is the scalp power spectrum, and the other one is the PSD of scouts) 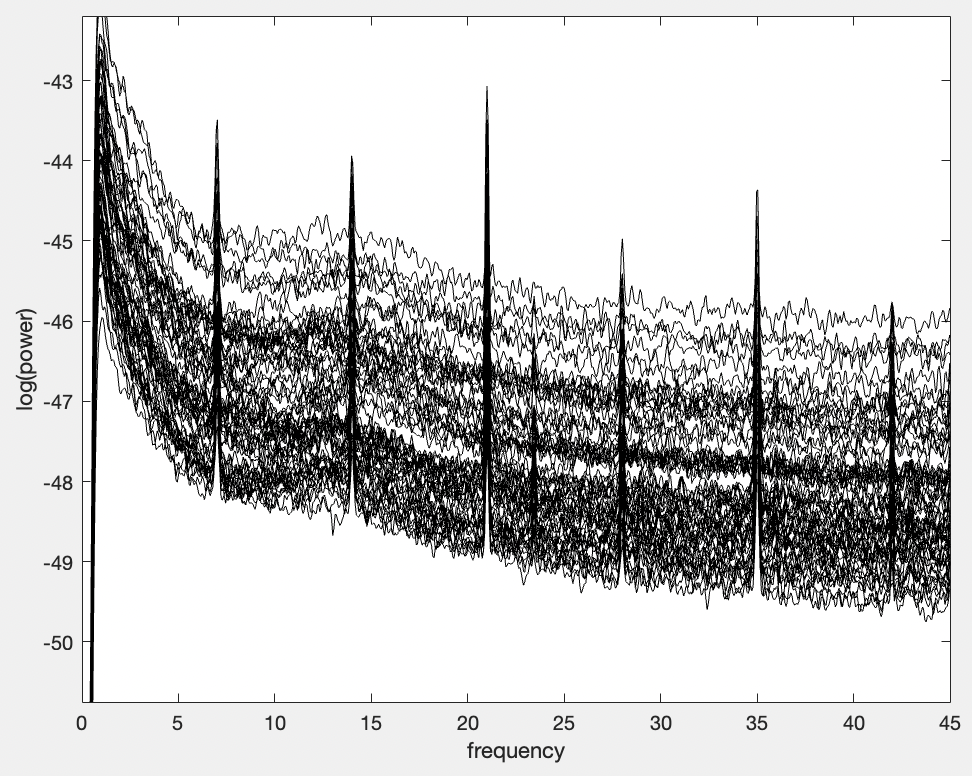 We suspect this is an artifact resulting from interference in Elekta HPI (head position indicator) coils, but we are not completely sure.

Does anyone have any experience of seeing these artifacts before. We are also afraid that it may interfere with the FOOOF algorithm, and therefore developing code to remove the same, but we would be happy to hear your thoughts/ ideas on the same.

I would not suspect the HPI system first hand: they are supposed to use much faster frequencies above 100Hz or even higher. Could this be another device in the study setup? Or something the participant was wearing that day? Do you see the same artifact on another participant of the same study?
You indeed want to make sure the data is clean before any further processing steps, incl. FOOOF, source analyses etc.

Is this 7Hz+harmonics noise present all along the recording session?
=> Try computing the PSD from the first 30s and the last 30s of the file. If you don't see it everywhere, try to understand where in the file this noise is present. You could try displaying the MEG by pages of 20s with a band-pass filter around 7Hz (adjust the cutoff frequencies to see your 7Hz oscillation best), select only some sensors where the noise is stronger, then scroll through the file, to see if the amplitude of the oscillation is constant over time.

If it is only localized to some short segments: mark them as bad and ignore them in the analysis.

If it is continuous and stable: you might be able to remove it efficiently with SSP. Use the process "SSP: Generic" over 30s (or more) of the recordings, with no event name, and the same band-pass filter as what you used in for reviewing the file. Hopefully this will give you one component that captures your 7Hz noise nicely.

Thanks Sylvain for your reply! Yes, this artifact is present in most patients if not all (and like I mentioned, it is not too prominent on the scalp PSD, but shows up on PSD of scouts, therefore went undetected

Thankfully, we did receive a reply from the MEGIN group stating that artifact may be resulting from the interference between HPI coils, but not the HPI itself as you correctly pointed out. They also suggested that it may be an outcome of using internal active shielding.

I have attached anonymized snapshots of the conversation for the benefit of anyone who faces the same issue.

Also, we are trying to write a code to manually remove the same, I'll also try using Brainstorm SSP for the same.

Thanks for your inputs

Hey Francois, thanks for your response! The artifact is indeed present across most of the recording, and is resulting from the MEG hardware itself (plz refer to my reply to Sylvain in this very thread).

I will use SSP to try and remove it. Thanks for your response