I am wondering how long the "Compute Sources" and "Extract Scout Time Series" functions should take, as it currently performs it really fast which makes me a bit suspicious.

Some information so that some assumptions can be made:

Specs of my PC

How I currently obtain my scout time series

I take the EEG/Mat file and and place it in the "Process 1" tab. 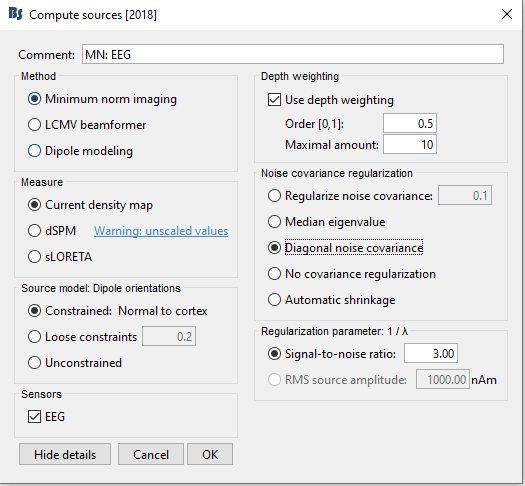 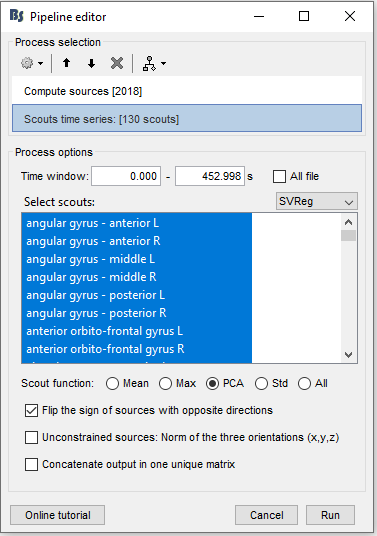 MATLAB output when running this pipeline

Updated view of the functional tab 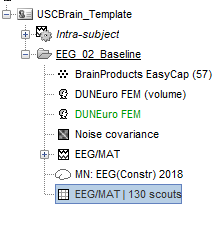 My real question/Why I am writing this long as post

The whole process of calculating the sources and extracting the scout time series took roughly 15 minutes, with most time being spent on the PCA calculation for each scout.

I am suspicious that this is too fast, and that I am doing something wrong here. Are my suspicions correct and if so, where to I make a mistake?

The whole process of calculating the sources and extracting the scout time series took roughly 15 minutes, with most time being spent on the PCA calculation for each scout.

15 minutes already sounds very long.
The computation of the MNE inverse solution is independent from the data and is expected to take only a few seconds.

Your signals look very long - is this resting state data?
In general, we recommend importing native file formats instead of manually semi-processed recordings from a .mat file, and then linking them to the database for preprocessing using the menu "Review raw file", as illustrated in the introduction tutorials. But maybe this is not applicable to your case.
https://neuroimage.usc.edu/brainstorm/Tutorials

My computer is on the older side, this might explain it?

It is resting-state data indeed. I am importing completely preprocessed EEG files.

EDIT: I just checked, before my computer crashes, it reaches 100% RAM usage and 100% ROM usage. I used "unconstrained" in the calculate sources 2018 (which does not result in a problem, the problem occurs during the extract scout time series step) and selected the "unconstrained sources: Norm of the three orientations (x,y,z)" option in the extract scout time series option.

I discussed my problem with a colleague who told me that it is logical that my computer crashes since I want to extract all 130 timeseries in a single run (I would need too many GB of RAM to be able to do this).

Thanks in advance for the patience.

EDIT: So I tried a very basic script adjustment: I copied the first "extract scout time series" and adjusted the names of the two scouts that should be extracted. 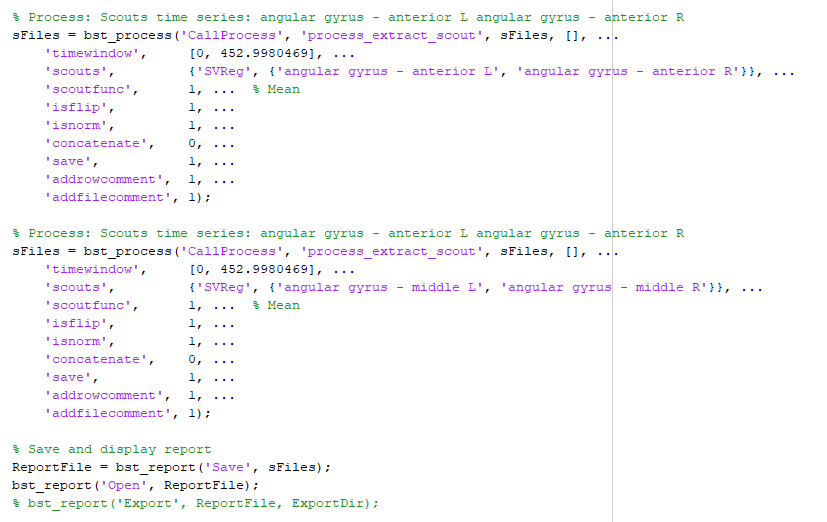 But I get the following error:

Any idea why it is happening and how I can solve it?

There is no reason for not calling multiple times the process "Extract scouts time series", but this would be terribly inefficient: it would load all the data, the inverse kernel, multiply the two to reconstruct this gigantic source matrix (Nsources x Ntime) in memory, and then average a few sources to get the scout time series. If you call twice the process, all this is done twice...
To optimize the memory and CPU usage of your scripts: learn how to use the resource monitor of your operating system, and the Matlab Profiler.

Why do you need all the time points loaded at once?
The most logical, if you want to split the process in two for memory reasons, would be to split the data along the time dimension. You need continuous signals at the end, you can concatenate the scout signals easily with a process.

I copied the first "extract scout time series" and adjusted the names of the two scouts that should be extracted.
Any idea why it is happening and how I can solve it?

You are erasing the variable with the original input filenames....
https://neuroimage.usc.edu/brainstorm/Tutorials/Scripting#Simplify_the_calls

A bit late, but I got everything working. Thanks for all the help along the way!