Hi, I got an error when I tried to run OpenMEEG for computing a head model. 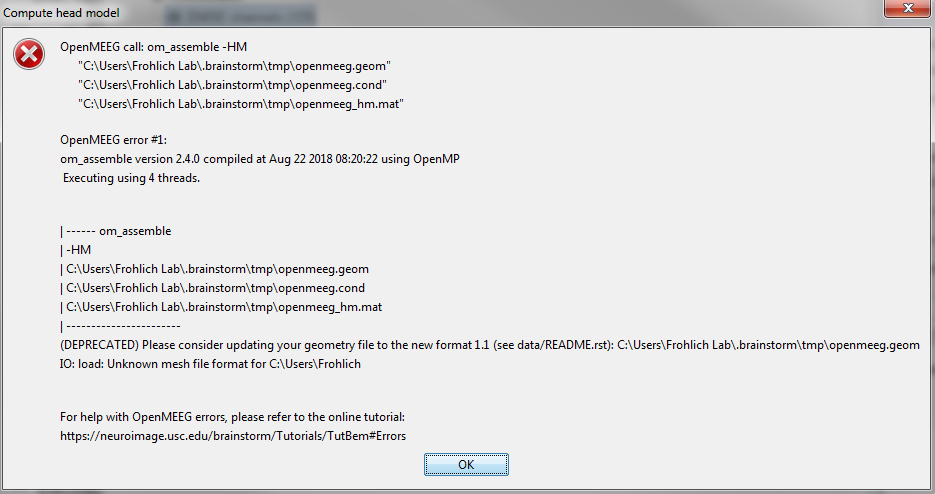 Could you help me to fix this bug?
I'm using 64-bit Windows7 and MATLAB R2015b.
Microsoft Visual C++ 2010 Redistributable Package is already installed on my pc.

the OpenMEEG code does not like when you have a space in your user name (file paths) unless you protect the file paths with quotes.

fix problem with the presence of spaces in path in .geom files in openmeeg files

once merged just update brainstorm and it should work.

The update from Alexandre has been merged.
Please update Brainstorm and try again.

Thanks Alex and Francois, it is working now !

I am having the same problem with my head modeling, unfortunately. I use Windows 8, 64 bit. I installed the latest version of the Brainstorm yesterday and downloaded OpenMEEG manually as it was recommended here (https://neuroimage.usc.edu/brainstorm/Tutorials/TutBem#Errors) and installed it from Brainstorm again but it didn't work too. Microsoft Visual C++ 2010 Redistributable Package was installed as well. There is pretty much memory available in the pc at the moment. There is no space within the folder path that might cause any problem as it was indicated here (OpenMEEG bug for head model). So I would really appreciate if you could share your opinions on what might the reason that I am getting this error message, please. I attached a screenshot here but it is pretty the same with the initial message in this thread. 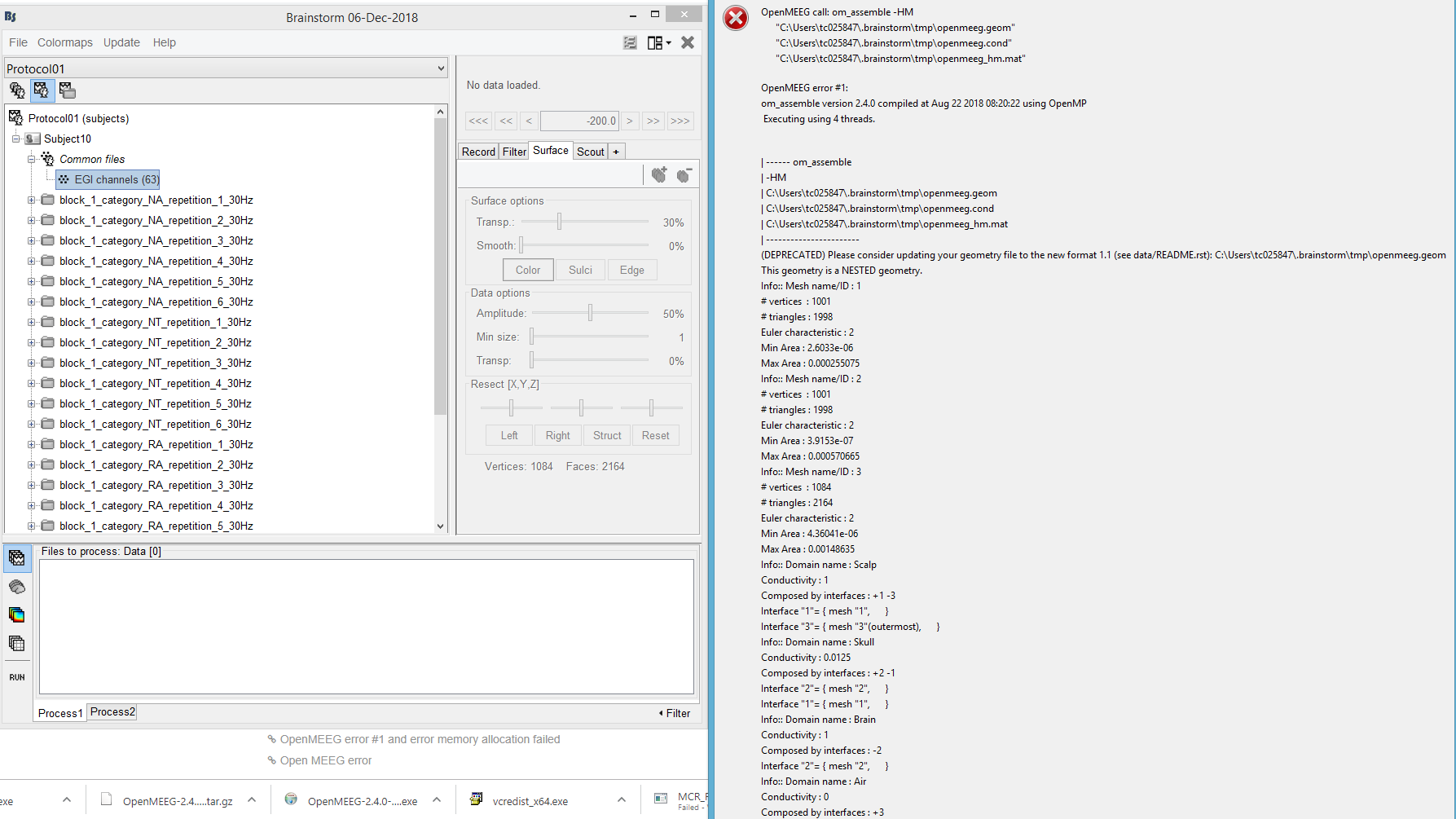 Thank you very much for any advice in advance,

Sorry I don’t see the error message? Does it say too unknown file format?

thank you for your reply. Sorry for the image, so I uploaded it to Dropbox, hopefully you could find it here https://www.dropbox.com/s/98qo0uw23j2hl1e/openMEEG_error.png?dl=0

Actually it says “Please consider updating your geometry file to the new format 1.1 …” I downloaded the latest Brainstorm version, I believe it shouldn’t be a problem isn’t it.

Do you think would this indicate to a lack of memory?Because all process work without a problem if I decrease the number of the vertices in BEM surfaces to the lowest number (642) or run OpenMEEG on each layer separately I don’t get any problems on running whole modelling. So it sounds like I am having trouble with the memory, doesn’t it? Do you think making memory adjustments in Matlab would help?

Thank you very much in advance,
Isil

yes it should a memory issue. I cannot do much about it.

@Isil_P_Bilgin Make sure you didn’t select a high-resolution cortex surface: the one selected in green should be a 10000V or 15000V surface

Otherwise, it is OK run to OpenMEEG with a lower number of vertices, eg. 1082/642/642, as suggested in the EEG&Epilepsy tutorial: https://neuroimage.usc.edu/brainstorm/Tutorials/Epilepsy#Head_model