For accurate timing of the brain responses, it is very important to estimate these delays precisely and if possible to account for them in the analysis. This tutorial explains how to correct for the different types of delays in the case of an auditory study, if the output of the sound card is saved together with the MEG/EEG recordings. A similar approach can be used in visual experiments using a photodiode.

This entire tutorial can be considered as advanced. It is very important to correct for the stimulation delays in your experiments, but if you are not using any stimulation device, you do not need this information. However, if you skip the entire tutorial, you will have uncorrected delays and it will be more difficult to follow along the rest of the tutorials. Just go quickly through the actions that are required and skip all the explanations.

Reminder: The full description of this auditory dataset is available on this page: Introduction dataset.

Delay #1: Production of the sound

Delay #2: Transmission of the sound

Delay #3: Recording of the signals

Evaluation of the delay

Let's display simultaneously the stimulus channel and the audio signal.

Detection of the analog triggers

Run the detection of the "standard" audio triggers on channel UADC001 for file AEF#01.

Explanation of the options (for future reference, you can skip this now):

Results of the detection

Repeat all the exact same operations on the link to file AEF#02:

Delays after this correction

We compensated for the jittered delays (delay #1), but not for hardware delays (delay #2). Note that delay #3 is no longer an issue since we are not using the orginal stim markers, but the more accurate audio signal. The final delay between the "standard_fix" triggers and the moment when the subject gets the stimulus is now delay #2 and the over-compensation.

We decide not to compensate for this delay because it is very short and does not introduce any jitter in the responses. It is not going to change anything in the interpretation of the data.

Detection of the button responses

The subject presses a button with the right index finger when a deviant is presented. We don't really need to correct this category of events because it is already correct. You can skip this section if you are not interested in parsing digital channels.

The digital channel Stim/UDIO001 contains the inputs from the response button box (optic device, negligible delay). Each bit of the integer value on this channel corresponds to the activation of one button. We can read this channel directy to get accurate timing for the button presses.

We have discussed here how we could compensate for the delays introduced in an auditory experiment using a copy of the audio signal saved in the recordings. A similar approach can be used for other types of experiments. Another typical example is the use a photodiode in visual experiments.

When sending images to the subject using a screen or a projector, we usually have jittered delays coming from the stimulation computer (software and hardware) and due to the refresh rate of the device. These delays are difficult to account for in the analysis.

To detect accurately when the stimulus is presented to the subject, we can place a photodiode in the MEG room. The diode produce a change in voltage when presented with a change in light input, for example black to white on the screen. This is typically managed with a small square of light in the corner of the stimulus screen - turning white when the stimulus appears on the screen and then black at all other times. The signal coming from this photodiode can be recorded together with the MEG/EEG signals, just like we did here for the audio signal. Depending on the photodiode, it is recommended to use a pull-up resistor when recording the signal. Then we can detect the triggers on the photodiode output channel using the menu "detect analog triggers", including the use of the 'Remove DC offset' option. 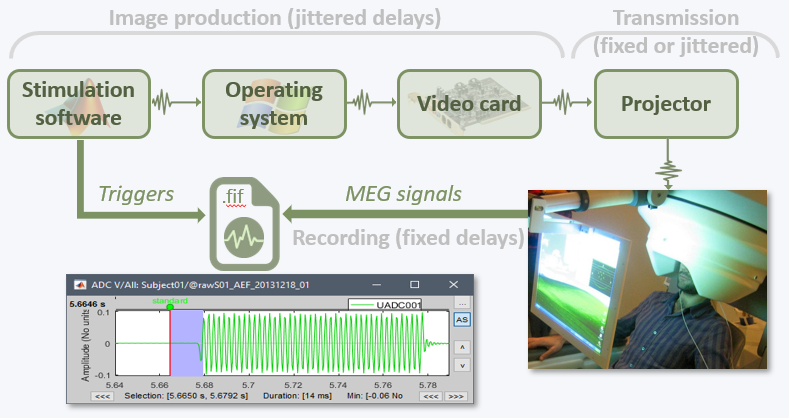