You can use the free BrainSuite and SVReg software package to extract segmented brain surfaces from a T1-weighted MRI image. Surface extraction and segmentation can either be automatic or manual--this tutorial will step you through the automated process (more information on manual tweaks can be found in BrainSuite's documentation).

Unlike Brainstorm, Freesurfer and BrainVisa, BrainSuite does not use a database structure for storing subject information and scans. Instead, by default it stores its output in the same folder as the input MRI scan. Thus, it is often best to have each subject's structural scan in its own folder.

Import the results in Brainstorm

The files that are imported from the BrainSuite folder are the following:

The successive steps that are automatically performed by Brainstorm:

The files you can see in the database explorer at the end:

How to check the quality of the result

It's hard to estimate what would be a good cortical reconstruction. Try to spot the most obvious errors, e.g. when the early stages of the brain extraction didn't perform well. Play with the Smooth slider in the Surface tab. If it looks like a brain (two separate hemispheres) in both smooth and original views, it is probably OK.

Display the cortex surface on top of the MRI slices, to make sure they are well aligned, that the surface follows the folds well, and that the left and right were not flipped: right-click on the low-resolution cortex > MRI registration > Check MRI/surface registration...

It is critical to get a good cortex surface for source estimation. If the final cortex surface looks bad, it means that something didn't work well somewhere along the BrainSuite cortical surface extraction sequence. This tutorial is not meant to guide you though troubleshooting BrainSuite results, but most errors in surface generation and segmentation occur at the first step, skull-stripping. If you are ending up with surfaces that include non-brain regions, or are missing large chunks of cortex, this step is where the error occurred.

To fix skull-stripping issues, re-open the original T1 scan in BrainSuite. Open the Cortical Surface Extraction Sequence and check the box next to "Register and label brain" as you did above, but this time uncheck "Skull stripping". Next click on Cortex > Skull Stripping (BSE) to open the skull stripping dialog box, as this will let you step back and forth until you get a result that works. First try increasing 'Automated Iterations' from 5 to 10 or 15, and press 'Apply'. If the results do not look satisfactory, then press 'Back' and try again. You can also try entering parameters manually by unchecking 'automated parameter selection'. Common parameter settings that work are:

In general, increasing the edge constant will exclude more areas of the brain (decreasing will include more areas), while increasing the diffusion constant will include more areas. Set the parameters as you want, then click "Step >" until it says "finished skullstripping" above the progress bar. If the results look good, then click "Run All" on the Cortical Surface Extraction Sequence dialog box to run the rest of the segmentation process; if the results do not look good, click "< Back" on the Skull Stripping Tool dialog box until the progress bar returns to 0% and try a different set of parameters. More information can be found in BrainSuite's documentation.

If after following these instructions you still don't manage to get good surfaces, you can try to run the automatic MRI segmentation from BrainVISA or FreeSurfer.

See the instructions to generate a new head surface file in the FreeSurfer tutorial.

Checking the box next to "Register and label brain" when running BrainSuite's Cortical Surface Extraction sequence causes BrainSuite to run a companion program called SVReg that implements an automatic parcellation of the cortical surface into anatomical regions. More information on this program can be found here:http://brainsuite.bmap.ucla.edu/processing/svreg/

SVReg's labels are imported into BrainStorm as scouts (cortical regions of interest), and saved directly in the surface files. To check where they are saved: right-click on the low-resolution cortex file > File > View file contents. You can see that there are two "Atlas" structures available, one that has Name='User scouts' and the other with Name='SVReg'.

Troubleshooting: You do not see the atlas SVReg

Workaround: Copy manually the file brainsuite_labeldescription.xml to the segmentation folder.

The SVReg atlas is available as a volume, with the same dimensions as the original T1 MRI.

An additional BrainSuite module allows the computation multiple parcellations (atlases in BrainStorm terminology). This is not integrated into BrainSuite yet but it is a separate executable and is a separate download. Follow the link for instructions:
https://github.com/ajoshiusc/svreg_multiparc 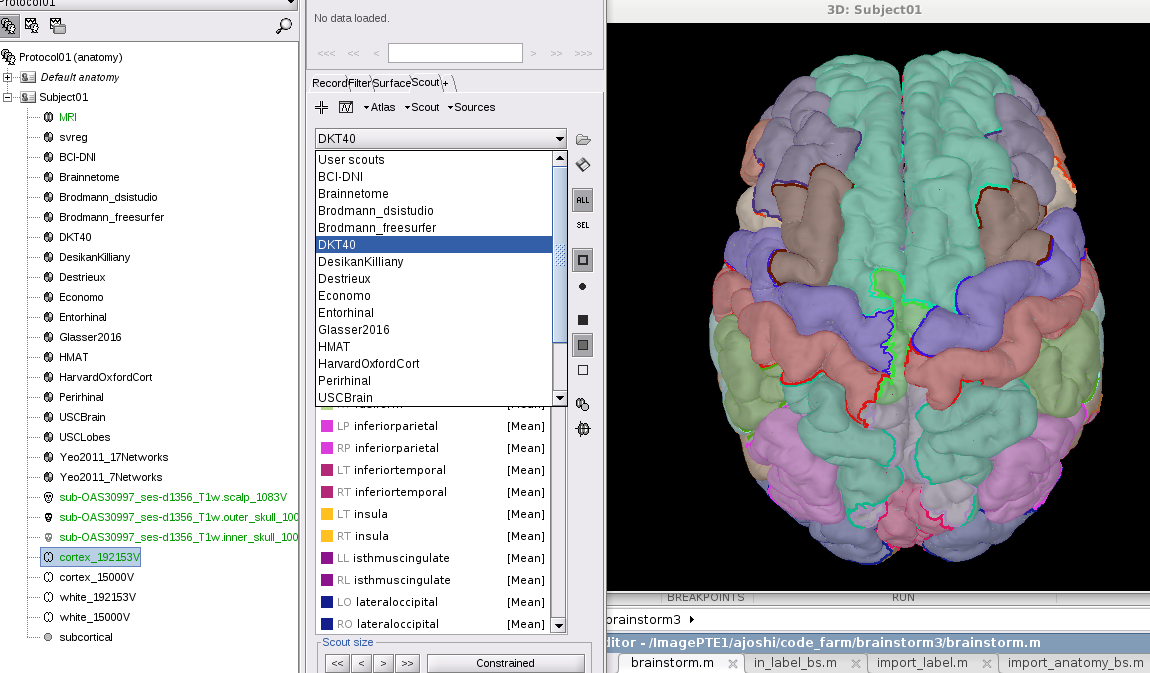 The file T1.svreg.label.nii.gz contains a volume the subcortical regions. Brainstorm reads these volume labels and tesselates some of these regions, groups all the meshes in a large surface file where the regions are identified in an atlas called "Structures". It identifies: 8 bialateral structures (accumbens, amygdala, caudate, hippocampus, pallidum, putamen, thalamus, cerebellum) and 1 central structure (brainstem). You can easily extract one structure (for example the brainstem or the cerebellum) by selecting the corresponding entries in the scouts list and selecting the menu Scout > Edit surface > Keep only selected scouts. It creates a new surface with only the selected regions. If you want to remove one or several structures, use the menu "Remove selected scouts" instead. Read more about the segmentation and labeling process in BrainSuite here: http://brainsuite.org/processing/svreg/

BrainSuite provides an accurate registration method to the Brainstorm anatomy templates (Colin27, ICBM152). The registration procedure works in the same way as the FreeSurfer-based registration illustrated in this tutorial: Group studies: Subject coregistration.

To use this registration, you need to use a template anatomy processed with BrainSuite.
Right-click on Default anatomy > Use template > Colin27_BrainSuite_2016 or ICBM152_BrainSuite_2016.