This tutorial introduces the features developed in Brainstorm to compute and view FOOOF models from a Welch’s Power Spectral Density (PSD) file.

Note: The FOOOF algorithm has recently been renamed by its authors to specparam.

The Fitting Oscillations and One-Over-F (FOOOF/specparam) algorithm is designed to identify and model features of the neural power spectrum. It performs a sequential decomposition of the power spectrum into aperiodic and periodic components, optimizing the modelled spectrum using a least-squared-error approach. The present tutorial will demonstrate the algorithm’s functionality within the Brainstorm interface; for a detailed breakdown of the algorithm, please refer to the FOOOF GitHub. 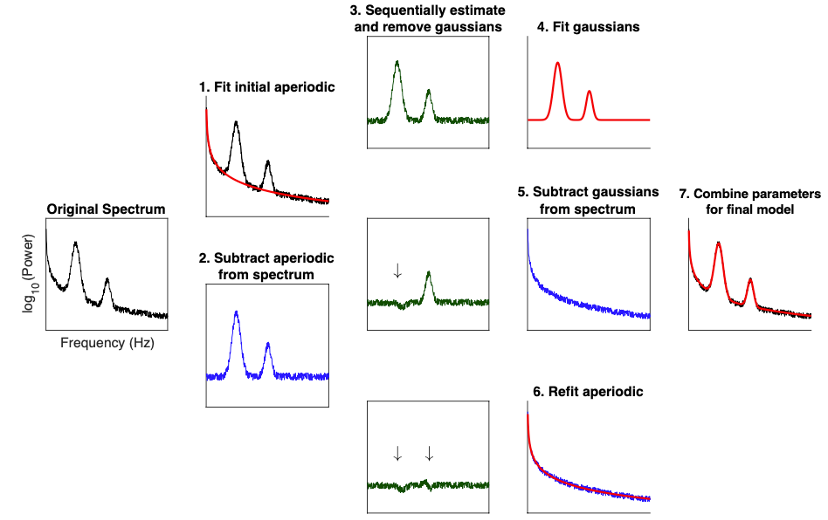 This demonstration uses sample data from the introduction dataset, and can be followed by completing all steps of the Brainstorm tutorial up to and including tutorial 10.

FOOOF is principally performed on Welch’s PSD files. Analysis of Fourier transforms are also possible, but not recommended. We will run FOOOF over the PSD files we previously produced.

Three new files should now be visible, with one below each PSD we just processed.

This is an ideal environment to view FOOOF models to ensure that they are fitting the spectrum correctly. Here, you can also double-click and view the original PSD file at the same time, selecting individual channels to determine goodness-of-fit qualitatively.

While viewing the FOOOF models within Brainstorm is helpful for qualitative interpretations, some may wish to extract the parameter values directly from the model for statistical tests.

Some process options are only available in the MATLAB version. They have been added to allow for greater flexibility in the algorithm’s settings; a few are actually within the Python version, but are inaccessible via MATLAB.

If you would prefer to use the algorithm in its original state, you can instead select FOOOF version: Python. To use the Python version, some configuration of your system is required.

FOOOF is an algorithm designed to complement many analytical techniques already in use today. Its purpose is to help researchers characterize the neural power spectrum more quantitatively; it is not necessarily meant to be used for exploratory means. The algorithm can return noticeably different models depending on whether the settings provided are suitable for the spectra being parametrized. Understanding the characteristics of a particular power spectrum is crucial to modelling them appropriately. The best way to determine whether a model is appropriate for a given spectrum is to compare the original and modelled spectra side-by-side.