This tutorial explains how to use DUNEuro to compute the forward model using the finite element method (FEM). The FEM methods use a realistic volume mesh of the head generated from the segmentation of the MRI. The FEM models provide more accurate results than the spherical forward models and more realistic geometry and tissue properties than the BEM methods. Its applications include accurate source localization in MEG/EEG/sEEG/ECoG and TMS/TDCS optimizations.

The scope of this page is limited to a basic example (head model with 3 layers). More advanced options for mesh generation and forward model computation are discussed in other tutorials: FEM mesh generation, FEM tensors estimation, FEM median nerve example. We assume that you have already followed the introduction tutorials, we will not discuss the general principles of forward modeling here.

DUNEuro is an open-source C++ software library for solving partial differential equations (PDE) in neurosciences using mesh-based methods. It is based on the DUNE library and its main features include solving the EEG and MEG forward problem and providing simulations for brain stimulation.

As distributed on the DUNEuro GitLab, the source code works only on Linux operating systems. Interfaces to Matlab and Python are possible, but you need to install and compile DUNEuro by yourself. For Brainstorm, we adapted this code and were able to generate binaries for the main operating systems (Windows, Linux and MacOS), which are downloaded automatically when needed as a Brainstorm plugin. This project is available on our GitHub repository bst-duneuro.

If you use Brainstorm-DUNEuro please cite the following papers in your work:

If you want to learn more about DUNEuro, please visit to the following web pages:

In order to reproduce the computation present below on your computer, you need to fulfill all the conditions listed below. Alternatively, you can read this page as a reference documentation about DUNEuro and not try to reproduce the results.

In order to use the FEM computations of the electromagnetic field (EEG/MEG), the volume mesh of the head is required. Brainstorm integrates most of the modern open-source tools to generate realistic head mesh, either from nested surface mesh or from individual MR images (T1 or T1 and T2). This tutorial describes only a simple approach based on three nested surfaces meshed in 3D with Iso2mesh. For the full list of available methods and description of options, please refer to the tutorial FEM mesh generation.

The forward model (or head model in the Brainstorm documentation and interface) describes how the electric activity in the source space (the cortex surface or a regular grid of volume points) influences the electric potential (EEG) or magnetic fields (MEG) at the level of the sensors. The FEM method uses the tetrahedral mesh computed above to establish this relationship.

For more information about these methods, users can check Johannes Vorwerk's PhD thesis.

DUNEuro binaries may crash for various reasons. We will try to describe the most frequent problems, however, in general terms, FEM forward modeling problems can be related with memory overload or extremely long computation times. For this reason it is always a good idea to reduce the size of the problem and test simpler solutions first, before attempting a fine grained computation.

One way to reduce the size of the forward problem is to decrease the number of FEM elements in the head model. When the field of the MRI is large, you may have the mesh of the neck and even the shoulders. In most cases, it is safe to remove the lower part of the FEM mesh, below the nose and the brainstem. Right-click on the FEM mesh > Resect Neck. 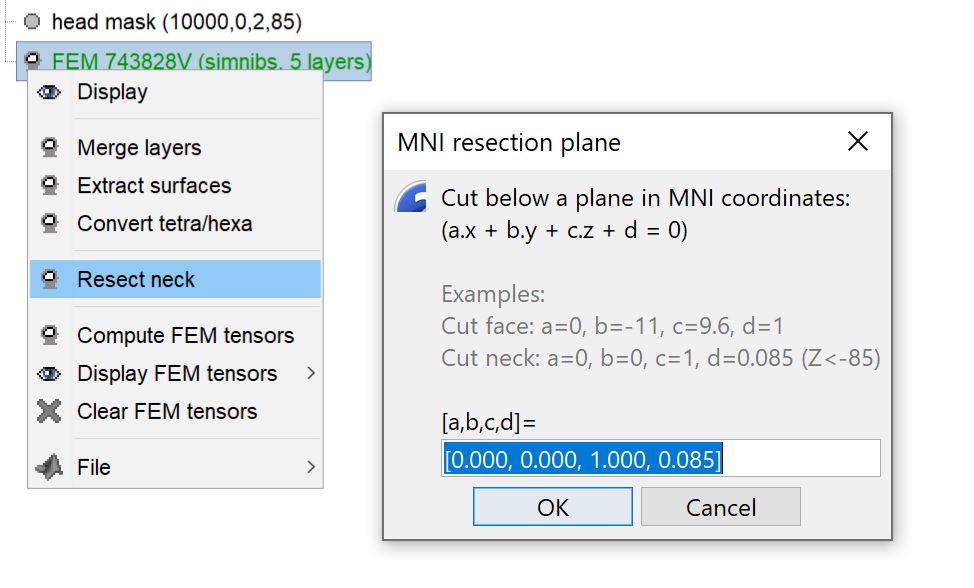 Some users have reported the following error when computing the head model with DUNEuro in Linux OS.

The problem is that DUNEuro requires some libraries in order to work properly. These dependencies should be in a folder where they can be located. The error message occurs when this dependencies eithera are missing in your system or in your path. In order to solve it, you can try to find any library with the same name. Be careful, libdl.so and libldl.so are not the same thing.

If you find a libldl library, but it is not in the correct path, try copying the library (or a link to it) to /usr/lib.

If you cannot find any related library in your system, try installing the following packages to force that dependency being installed in your system. For instance, in Ubuntu you can run: